Asbestos-containing material (ACM) in soil has been hiding in plain sight for decades, and it’s getting harder to ignore. As many in the construction industry know, finding unexpected ACM in soil can bring a construction project to a sudden halt, and can increase construction costs by tens of thousands to millions of dollars.

Asbestos is not a thing of the past — far from it

At one point in the U.S., asbestos could be found in almost every part of a structure — pipe insulation, floor tiles, cement, wire insulation, roof tiles, building siding, and more. As you probably already know, asbestos has a variety of construction benefits including being a thermal insulator, highly fire resistant, durable, weatherproof, termite resistant, and — one of its most irresistible qualities — it’s inexpensive.

Though it’s been used for centuries, asbestos became common in manufacturing in the U.S. in the 1800s, and construction use of asbestos really ramped up after 1900. Safety questions about asbestos products arose in the 1970s, but the EPA did not start banning asbestos in certain products until the Toxic Substances Control Act (TSCA) in 1989. Among many dangerous side effects, inhalation of asbestos fibers was shown to lead to cancer. Many people mistakenly think asbestos is completely banned in the U.S. (It’s not.) Asbestos-containing building products are still manufactured in the U.S. and can even be purchased at popular home improvement retail stores.

Why ACM in soil is a huge roadblock for construction

When they suspect ACM is in soil during construction, many contractors — concerned about employee health and safety lawsuits — are halting work until the asbestos danger is assessed and abated.

Unfortunately, due to conflicting regulatory programs and policies, many owners, contractors, and consultants aren’t sure exactly what to do about ACM in soil, and aren’t even sure whether they should do anything at all.

Some turn a blind eye, hoping it won't become a problem on their project. But, it’s only a matter of time before ACM in soil will come back to haunt you. That’s why it’s essential to tackle the potential problem of ACM in soil head-on, before construction, and work the cost and logistics of abatement into the project timeline and budget.

Nobody likes paying premiums for dealing with ACM, but if you plan for it up front, it takes a much smaller chunk from your budget than if you discover it after groundbreaking. To play it safe, make sure you know what you’re getting into before you dig.

Not every construction project needs a plan for asbestos-containing material in soil, but there are specific circumstances when checking for it makes logical sense.

Four times to check for asbestos in soil:

1. The most obvious: When your site is a landfill. 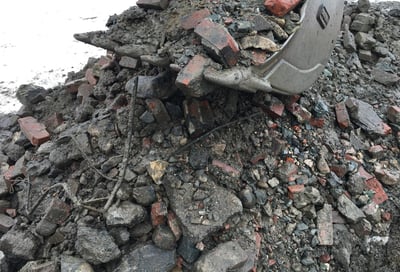 Not all landfills are capped and clearly delineated. Many old dumps were filled during the early-to-mid 1900s before regulatory oversight, and scores of closed dumps were bulldozed and redeveloped for commercial and industrial purposes.

Decades later, some of these properties are prime for redevelopment. Before you do anything, find out if the property you’re redeveloping is the site of an old dump.

While building construction and demolition debris is largely banned from landfills today, just decades ago, it was commonly landfilled. Careful site history review can reveal whether landfilled building construction and demolition debris is a concern. But you won’t know for sure if asbestos is present unless your subsurface investigations are designed to look for it.

Takeaway: Evidence of an old landfill? Checking for ACM in soil should be on your initial planning checklist.

2. Localized condition: When there was historic building demolition or fire at your project site.

Since asbestos doesn’t burn, fire may actually concentrate ACM in the ground. Before current regulations, buildings — burned or not — were demolished without first removing hazardous materials such as asbestos. Then, remaining building debris was often leveled onsite with a bulldozer or backfilled into the old basement.

Relics of the past lurking below an otherwise ordinary-looking site can create unintended financial burdens on a project. Burned or bulldozed ACM buried in soil is easy to miss if your consultant is not using the right site investigation approach, which is why test pits are critical in this particular scenario.

Takeaway: It’s wise to look for potential ACM at the locations of former buildings. 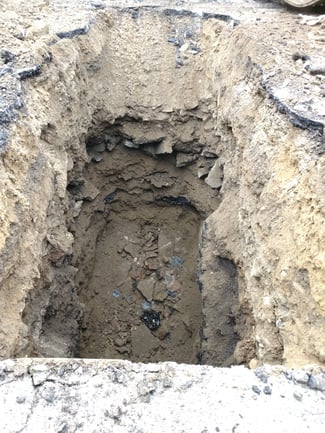 If your test borings show small amounts of brick, wood, or concrete, you might think you’re dealing with common urban fill. But, then, surprise! Construction starts, and you find that the fill contains a significant amount of building rubble debris, which makes your contractor fear asbestos.

Suddenly everything stops while you test, confirm asbestos, and spend far too much time seeking abatement permits and too much money on specialty abatement contractors and asbestos waste disposal.

Contractors are increasingly flagging building rubble debris in fill due to both worker health and safety concerns, and because soil-receiving facilities won’t accept it. Construction stops until the situation is assessed and addressed — which could take months. Regulatory approval timelines are long, and premium remediation costs are steep and not included in most budgets. Plus, you’ve lost the opportunity to proactively adjust the project design to reduce impacts caused by excavation through asbestos debris.

Takeaway: Include test pits in the site investigation program since asbestos in building rubble debris is easy to miss with borings only.

4. It looks normal to me: When there is ACM in your urban fill, but nobody can see it.

Admittedly, this is a tricky situation. Asbestos is not always friable and fibrous insulation. It might be in the coating on pieces of wire, in the bits of discarded roofing paper, in firebrick, cement-fiber pipe, or a myriad of other building materials that are commonly found in urban fill. The current standard of care is not to look for ACM in urban fill. 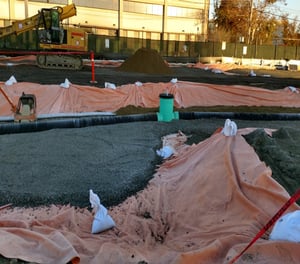 However, the day is likely to come when the standard of care changes. States like Massachusetts are directly tackling the problem and are re-evaluating their ACM in soil policy. As projects continue to go sideways when asbestos in soil is discovered, organizations may realize that facing the possibility of ACM in soil up front should be the standard of care.

Takeaway: If you’re not checking for ACM in soil during pre-construction investigations, then be prepared for the fallout if it’s found during construction.

Develop a proactive plan for asbestos in soil

Contractors and disposal facilities are becoming more aware of the possible regulatory and health and safety risks of ACM in soil — and their legal consequences — driving the need to have a proactive plan so projects don't screech to a halt.

When starting a construction project, your environmental consultant should be helping you think strategically about when you need to check for the presence of ACM in soil. It all depends on a project's circumstances and an organization's overall risk tolerance.

However, remember — if you’re planning a construction project and nobody is talking about ACM in soil, you may not be talking to the right people.

So, you think there may be ACM in the soil of your current project. What do you do now?

To protect your employees and neighbors, your project, and your company, first make sure you’re working with the right consultant and developing a custom strategy.

It’s best to know what you’re dealing with up front so you can find the right solution and work it into your budget and timeline. Being proactive helps to avoid projects screeching to a halt.

It's also important to note that not all construction projects are going to require test pits and extra budget dollars to look for ACM in soil. But, if you’re working on a project that fits into the four examples we mentioned, it’s a good idea to start a conversation about what to do next.

There are things you can do to control the time and cost impacts that ACM in soil can do to your construction project. Get the specialized help you need to choose the right response for your project’s scope and budget, from a small condo building to a high-profile institutional structure.

Don’t fear the presence of ACM in soil — there are cost-effective options! What options, exactly? Stay tuned. We’ll dig into those next in our asbestos in soil series. For now, feel free to ask questions in the comments, or shoot us an email at kdilawari@haleyaldrich.com.